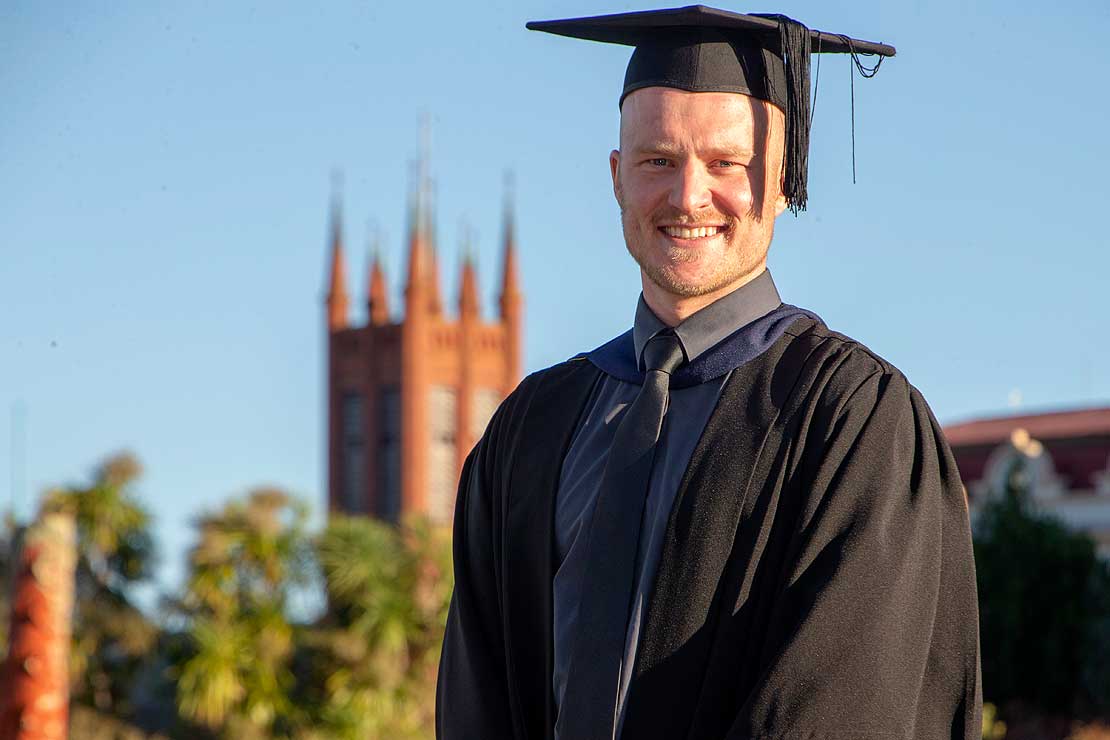 Toby Cunliffe-Steel after receiving his Master of Sport Management.

While health issues derailed his dream of competing at the Tokyo Olympics, his sports career opened up plenty of other opportunities, including pursuing a tertiary education. When he received his Master of Sport Management yesterday, Cunliffe-Steel became the first person in his family to graduate from university, let alone with a postgraduate qualification with distinction.

“Athletes are so fortunate to have Prime Minister’s scholarships available to them thorugh High Performance Sport New Zealand that specifically support study. I'm hugely appreciative of the opportunities this enables, so there's no way I was going to waste it,” he says.

Cunliffe-Steel completed both his bachelor’s and master’s degrees at Massey University via distance learning. While it wasn’t always easy balancing study and sport – especially when the other rowers in his shared accommodation spent their free time playing video games – he found the flexibility worked for his lifestyle.

“To advance my rowing career I had to base myself in Cambridge and I knew of Massey's strength in distance education,” he says. “I would not hesitate to promote the distance learning programme to anyone that has a significant other commitment that keeps them off campus.”

Bouncing back from disappointment

There’s no doubt 2018 was a tough year for the self-confessed sports junkie but, in some ways, study was a welcome distraction.

“In 2018, adrenal fatigue from overtraining meant I got into a state where my body effectively gave up recovering. The team doctor told me the only way for me to return to health was to sit on a couch for a minimum of three months. For someone whose longest break from training since leaving high school was a week, this took a significant psychological toll, and I’ll admit I didn’t rest as much as I should have.

“Retiring was tough. I hadn't achieved what I wanted in the sport and it's hard to grapple with the idea that you've had to leave because you worked too hard. But I processed the fact that while my athletic pursuits were suffering, there was no need for my educational ones to suffer too. I put my energy into doing well. Now I’m set to receive an endorsed postgraduate qualification, so I'm hugely fortunate.”

One door shuts, another opens

Cunliffe-Steel is proof that when one door closes, another often opens. When he retired from rowing, one of his former sponsors offered him a job with his new venture, a satellite internet company. While completing his sports practicum for his master’s degree, he used his new employer as his case study, which brought some valuable critical thinking to his role.

Today, he juggles a communications role with Gravity Internet and being a consultant for sports sponsorship firm Waddell+Associates. He’s also an ambassador for iSport Foundation, the non-profit established by rugby legends Richie McCaw and Dan Carter to help young people reach their potential through sport.

He’s determined to continue making a meaningful contribution to sport, but this week will be taking time out to reflect on his academic achievements.

“I'm forever searching for the next opportunity to develop but I also believe that, sometimes, you do need to take a moment to stop and reflect on what you’ve accomplished. I'm hugely, hugely proud to have achieved what I have in my studies and I reflected on that after I walked off the stage holding my master’s degree.”

Gender-diverse language something to celebrate