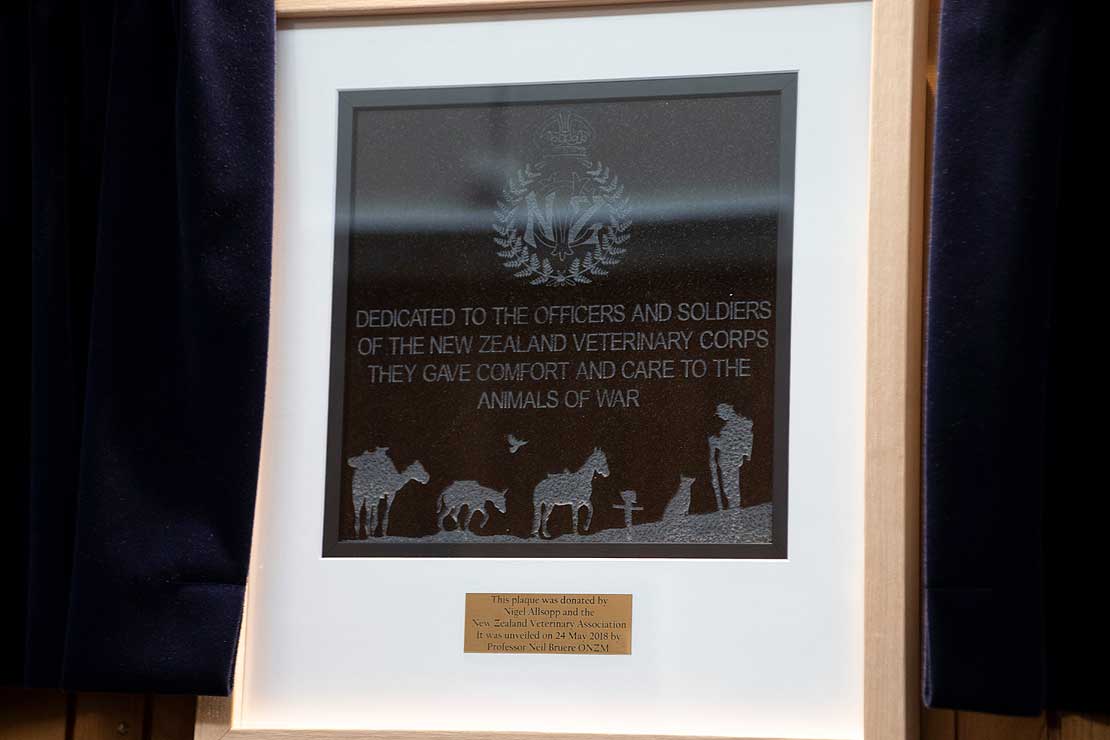 A plaque dedicated to the New Zealand Veterinary Corps has been unveiled at Massey University’s School of Veterinary Science today.

The New Zealand Veterinary Corps formed in 1907 became truly active at the outbreak of the First World War. They were first required to oversee the purchase of suitable horses, and their transport to Europe and North Africa, while also training others to care for the horses. A total of 9,988 horses were shipped overseas during WWI with many passing through a camp just outside Palmerston North, which was a base for receiving gifted and purchased horses.

The corps was made up of a small number of qualified veterinarians as commissioned officers, and comprised farriers, groomers, blacksmiths and more. Mobile and hospital-based veterinarians served in Egypt, Sinai and Palestine as well as on the Western Front at Gallipoli, the Somme, Messines and Passchendaele. Donkeys, mules and military dogs also required veterinary attention. Remembering those who served

Glyn Harper, Professor of War Studies, who spoke at the unveiling, says the corps where a vital force.

“In a military force so dependent on horse power, the New Zealand Veterinary Corps was a small but vital part of the New Zealand Expeditionary Force of the First World War. This was why the Centenary History, which Massey University is a key partner along with the New Zealand Defence Force and the Ministry of Culture and Heritage, will feature a volume to be launched later this year on the New Zealand medical services. A significant section of this volume focuses on the care and welfare of animals. All who served in this role made an important contribution to New Zealand’s war effort. In the centenary of that great and terrible conflict it is fitting that we remember all who served, including those who cared for the animals used in the fighting.”

During his research, Professor Harper has looked into the role of animals in war, and published the children’s book Roly, the Anzac Donkey which followed Richard Henderson and his donkey Roly, who together saved many WW1 soldiers. More recently he wrote Bobby the Littlest War Hero, a story about a band of tunnellers in the First World War, and the tiny canary who helped them survive.

Massey Veterinary School dean of admissions Associate Professor Jenny Weston says, “as we recognise 100 years since the end of the First World War, it is timely to remember the efforts of the veterinarians who provided care for the animals who also served. In addition to treating wounds, the veterinarians were kept busy treating conditions such as strangles, anthrax, ticks and lice, ringworm, equine influenza and sand colic.

“The New Zealand horses were widely recognised as being of exceptional quality. Although only four horses returned to New Zealand, many members of the Veterinary Corps returned to illustrious careers, heading up the Department of Agriculture and other important positions within Government service.”

Wreaths were placed in front of the plaque by those attending. In attendance were representatives from the New Zealand Army, including dog handlers with an explosive detection dog and an infantry support dog. Also in attendance were representatives from the Land Combat Capability Working Group, Royal Army Veterinary Corp, Royal New Zealand Air Force and the New Zealand Veterinary Association, as well as Massey University Vice-Chancellor Professor Jan Thomas, College of Sciences Pro-Vice Chancellor Professor Ray Geor and many more staff and students from the Veterinary School.

Former Massey staff member Ian Steffert played the Lament “While we remember them” on the bagpipes, followed by “The Last Post” by NZ Army Band Reserve Corporal Tim Cook.

Amongst the other speakers: New Zealand Veterinary Association’s Charlotte Cantley read “The War Animal’s Prayer”; Cyril Hopkirk’s grandson Robin Hopkirk read parts from his grandfather’s memoirs who was a member of the corps; and NZ Army’s Captain Bruce Page as a representative of the Australian War Animal Memorial Organisation.

Professor Emeritus Neil Bruère finished the ceremony appropriately by saying, “I hope that when future students walk past this plaque they are reminded on the great people who went before them.” Before reading “The Ode to the fallen”.