Home > About Massey > News > Serving up a sheep milk smoothie

Serving up a sheep milk smoothie 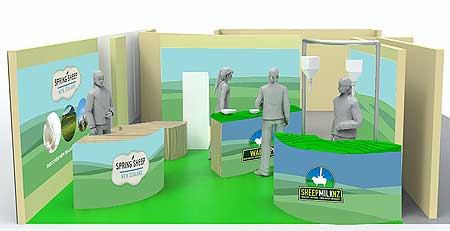 Shifting consumers’ mindset to sheep milk is the objective of a fun and informative stand at this week’s National Fieldays that mixes the resources of Massey University staff and students.

Representatives from the School of Design, School of Management and the Institute of Food Science and Technology have combined their talents to encourage visitors to the Massey stand and take a punt on sampling smoothies made with sheep’s milk.

Associate Professor Craig Prichard from the School of Management says that overseas sheep milk is an important food source, particularly across southern Europe, but here it is only used to feed sheep with only about 20,000 currently being milked.

“Sheep were always considered a meat and wool source in this country, when really they are a three product animal – including milk.”

Dr Prichard leads Sheep Dairy New Zealand, which is a group of farmers, scientists and consultants engaged in supporting the development of the New Zealand sheep dairy industry.

He has enlisted the support of the School of Design to build a display stand to promote the benefits of sheep milk.

The stand, designed by Master of Design graduate Justin Hughes, features two smoothie dispensers with teat-shaped exit points,  that are suspended above people’s heads to deliberately evoke the idea of life on the farm and the practice of milking farm animals.

The top of the stand’s benches are designed in a way that also captures the landscape of rural life “ so it will stimulate curiosity to passers-by and invite people to come in and explore the landscape of sheep’s milk literally and figuratively,” Mr Hughes says.

Development of the stand was funded by a Pukeahu ki Tua Contestable Fund Grant awarded to Massey University staff, including Dr Prichard, to help finance  the work of Massey students with entrepreneurial projects.

The smoothies have been mixed and made by food technologist Zoe Devulpian and also include a choice of toppings such as dehydrated fruit and nuts, coconut, granola and chocolate.

“ We want to try and capture people’s imaginations and get them to experience sheep milk for the first time,” Mr Hughes says.

Other attractions related to the project that can be seen at the stand include three sheep milk dishes that SheepMilk NZ’s ambassador chef Marc Soper will cook in the Fieldays kitchen theatre, plus a children’s book My Granny milks sheep, written in both English and Te Reo by Dr Prichard.

The team have also designed and built a small flock of cardboard sheep that children can play with and draw on. These initiatives all look to build on an idea first tried last year when muffins, cheeses and desserts made with sheep’s milk were offered as an accompaniment to the drink.

“It’s all really a safe and fun way of sensitising people to the idea of using sheep’s milk,” Dr Prichard says.

Massey transforms courses to additional digital offerings under Digital Plus